After the redesign of the website, which we have tried to keep as close as possible to the former, we have renamed what we do to services, resources to downloads and BCM Shop to Charity shop. We hope you are pleased with the new website, and any feedback would be very much appreciated.

BCM’s shop in Kingstanding is not just about making a profit but also about sharing God’s love and care in the community. The staff and volunteers always have time to chat or offer a listening ear.

Birmingham City Mission has produced a range of Bible story booklets for children for Christmas, Easter and all year round. Here you can view the brochures or download the accompanying PowerPoint presentations.

BCM has worked with Birmingham’s homeless community since its beginning in 1966, offering food, friendship and support to some of our city’s most vulnerable and marginalised people.

The Children's team's main work is to support Christian teaching in primary schools across the city through delivering acts of collective worship (assemblies), R.E. lessons and after-school clubs. All information about Christian beliefs is presented in line with government guidance.

Every Christmas, BCM distributes gifts to thousands of children in our city who would otherwise not receive presents. It is a mammoth task that relies on the generosity of many people who give toys, energy and time to ensure each child referred to us receive a sack of gifts on Christmas morning.

Through practical and emotional support in a safe and caring environment, ElderLink offers the opportunity for substantial improvement in the circumstances and purpose of older people.

Since 1966 BCM has been committed to proclaiming the Good News of Jesus Christ to the people of Birmingham and challenging them to consider their need for God.

Over the last 12 years, the exhibition team has attended more than 105 schools in the Birmingham area, and many schools host the exhibitions regularly. The presentations are interactive and rich in material designed with guidance from the National Curriculum.

The BCM Resource Centre distributes essential goods – food, clothing and furniture – to those in need.

The vision of BCM’s Youth Team is to serve, support and enrich the young people of Birmingham, regardless of their social, religious, or cultural background.  We aim to provide engaging, interactive, and thought-provoking experiences for young people.

Proclaiming the gospel, helping those in need.

City Missions began in the 1820s and were among the first interdenominational Christian societies. Birmingham City Mission was established in 1966 by Edwin Orton and a group of volunteers forming a fellowship of Christians drawn from a range of churches, united in their desire to express the life-changing message of Jesus Christ in word and action.

During those early years, city centre open-air meetings were held outside St Martin's in the Bullring, where thousands heard the gospel. Almost immediately, homeless people came and were given soup and blankets. So emerged the two emphases of what we do – proclaiming the gospel and offering practical help to those in need. 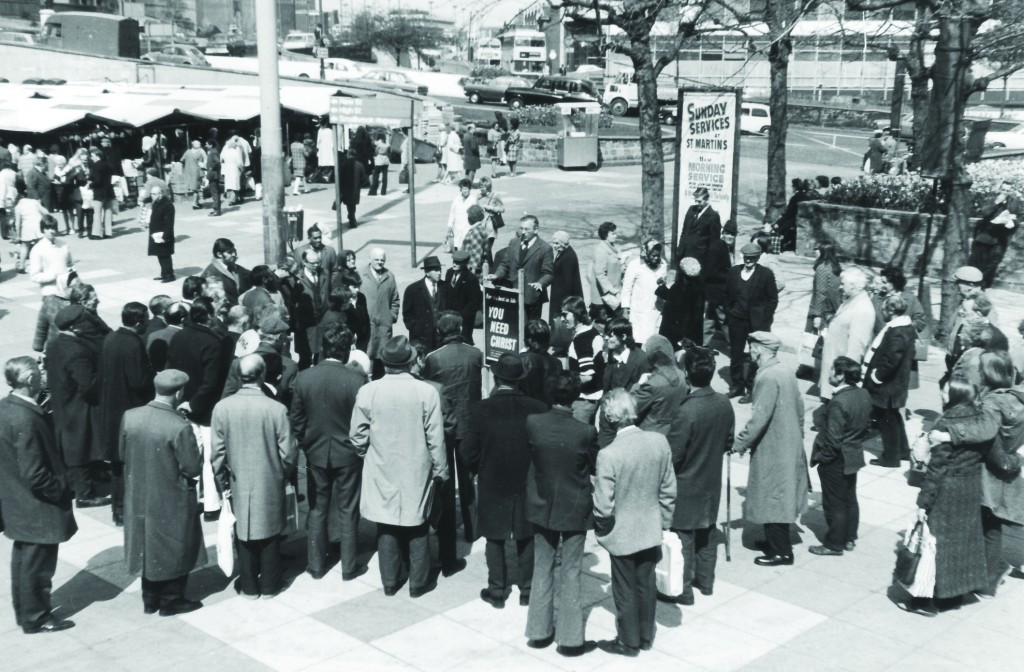 The homeless work grew significantly from the 1980s onwards, with three residential projects at one point. This work is now centred around the Care Centre, a drop-in for the homeless and marginalised, and the Resource Centre where people in need can access food, clothing, and furniture. The 1980s also saw the start of ElderLink, offering lunch clubs and a home visiting service, and the Youth Team, delivering assemblies, lessons, clubs, and events. The Children's Team was formed to serve the city's primary schools in the 1990s.

Birmingham City Mission is a Christian mission that offers its services without tests or conditions. It organises several projects throughout Birmingham, offering friendship and support to the homeless, elderly, young and those struggling with poverty.

Britain's second city has a population of over 1 million, with more than 3 million in the West Midlands. There is a rich and diverse mix of language, background, and culture. As in every prominent city, there will always be those with significant problems: sickness, pain, poverty, loneliness, addiction, family breakdown and unemployment. Even those who are outwardly successful and comfortably off have deep spiritual needs – so many are looking for meaning and purpose in their lives.

Today our city missionaries still go out onto the streets, door-to-door, sharing the Christian message.

Enter your email to subscribe to our monthly newsletter.

Thank you! Your submission has been received!
Oops! Something went wrong while submitting the form.